On Knowledge; The Illusion

“Morning, in sun, while I solved mathematics, a pigeon landed at my shoulder and asked about the time. As I searched for my watch, the pigeon flew away.”

On Love; The Emptiness

“His name was He and hers She. He met She at varsity and fell in love. She loved him back. They got married and settled in A-magica. Everyone felt delighted watching this beautiful couple. Then happened this. One day, while it rained, they strolled hand in hand. Then She stopped and asked, “Why shouldn’t we die?” While She asked, She didn’t smile, neither He.
I haven’t learned anything of them since then and no one ever asked.”

On Success; The Tricked

“Not so long ago there was a guy. Intelligent, laborious. His family middle class, his ambitions high. He was a cool man. He got everything in life. Then happened this; returning once from his office, he stopped his car on the bridge, walked a little and then jumped into the river. After three days of search police got his body; cold, swollen, but not a piece of suicide note and no background story.”

On Awareness; The Myth

“Morning, that strange day, when I woke up, it was dawn. I found it a good opportunity to take a walk. So I left the bed, locked the room and strolled to riverside. In the way I met yawning fog, praying birds, laughing trees and rising sun. In the river I saw my shadow waving and walking with me.
Then it became bright day, my usual time to wake up. I returned tired, unlocked the door and was shocked next moment. Someone was sleeping in my bed. Terrified, slowly, without any sound I moved to bed and abruptly removed the blanket…there it was me still asleep.”

On Wisdom; The Epic

“Once there was a man. Over the time he became too old and then died. But he left his two sons behind. Then over the time both of them died one by one. But they left several children behind them. Some of these children have already died and some are waiting. Those who are waiting don’t accept that they will also die.”
This is an old story found on the walls of caves of eastern hills. It is too old to be true.

On Humor; The Time Is Curved

“Afternoon, as I returned from college, I met an old man, shivering, sitting in the sun near graveyard. As he looked at me I tossed a joke, “Are you looking for the perfect place inside there?” He chuckled and said,” No, I live inside, in that corner one. But it is too cold today.”

On Character; The Greed

“It was shower in the morning.

I saw a pair of crows near a water lodge. One had a piece of bread or something, other watching from distance with greed. First one was busy eating, not looking at another. I thought in my heart, “See, what a damn creature it is! Not sharing food with fellow scout.” It seems, it read my thought and flew over my head, leaving its bread and shouted with full growl, “I am not damn you.” 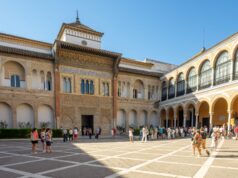