Education has always been important and it is crucial for the entire developmental process of a country, its welfare and progress. S.I.O being the pioneer students’ organization has collected all the proceedings of 9th sessions of the 14th Legislative Assembly in the month of March 2016 related to primary and secondary education, higher education, and technical education field and the response from the honorable ministers in this regard and made a thorough study and analysis on these matters, as it has done continuously for the last 4 years.

Additionally SIO Karnataka has come up with a book titled “Sadanadalli Shikshana” (Education in Assembly) where the experts from primary, higher, professional and other education fields have penned down their analytical views on the respective proceedings in the session. On 24th November, to release and discuss this analytical report, SIO Karnataka had organized a round table conference on “Education in Assembly” at Legislative Hall, Bengaluru, wherein students, educationists, academicians, student’s organizations and eminent personalities interacted deliberating on the present Education system and  its policies. Dr. Niranjanaradhya VP (Educationist, Bengaluru), Dr. Abdul Azeez (Chair Prof. NLSIU), Mr. Ravindra Reshme (Senior Journalist), Mr. Basavaraj Gurikar (Vice President, All India Primary Teachers & Schools Association) and Mr. Labeed Shafi addressed the gathering on various aspects and brought to the fore the discussions on education, trajectories of policies and the current regime’s move. 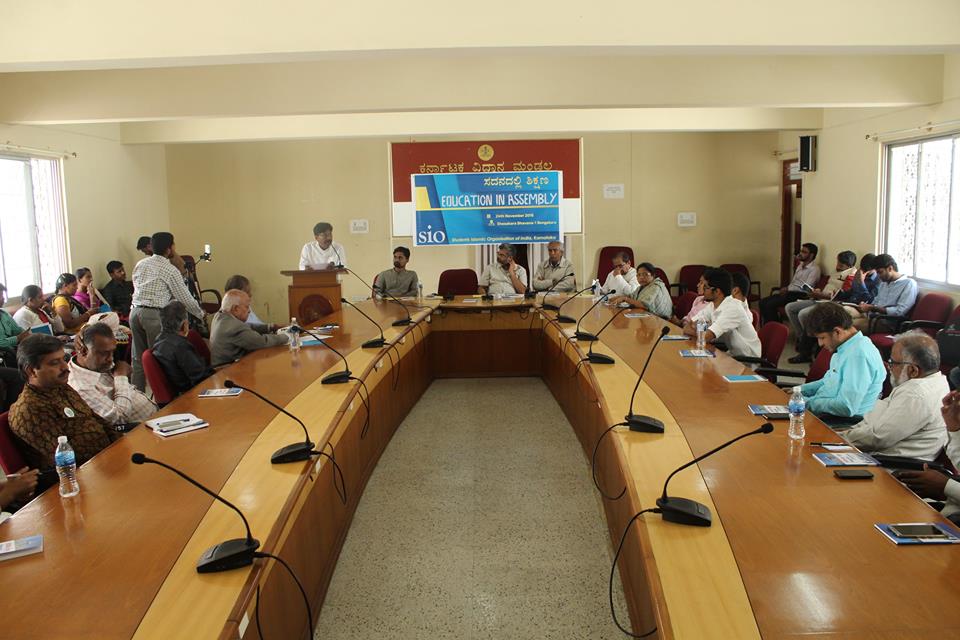 Since, it is the responsibility of people’s representatives to evaluate the government’s policies and prevailing education system, and to suggest any recommendations after evaluating its pros and cons, SIO had analyzed all the questions raised by our elected representatives. Around only 30 members have raised questions regarding primary and secondary Education in the legislative Assembly and got a written response from the honorable minister for primary and secondary education.

The questions that were raised this time on the primary and higher secondary education system can be broadly classified into basic infrastructure, vacant posts, status of government schools, and implementation of RTE Act in the State. Many important questions and suggestions regarding making government schools – a Model school by allocating specific budget for it, issue of training school teachers, commercialization of schools, closure of government schools, recommending corrective changes in RTE Act like allowing person with any age to have free & compulsory elementary education, issue of less allocation of budget to education sector etc have not been raised and discussed seriously. Similarly, higher education is no indifferent. But, it is to be appreciated that 31 Elected Representatives have raised questions regarding higher education sector during the assembly sessions. Out of these, some questions have been repeated. Some were able to get a response on statistics alone. The highest number of quality questions was raised by Sri. Balaksrishna C N. The other elected representatives must also raise relevant questions and thus contribute to the improvement of education sector. In higher education also, some important questions have been vastly missed out like commercialization of education, steps to improve quality of higher education, incidents of ragging and racist attacks on students and several other such incidents including the recent one which  happened with Tanzanian girl student in Bengaluru, reasons for unemployment of graduates and declining research interests.

Sri. Niranjanaradhya, V.P. Fellow and Chief, Education Program, has analyzed the questions and answers on primary and high school education, that were raised by the People’s representatives and answered by the hon’ble Ministers whereas the questions on higher education sector and their answers have been analyzed by the famous Educationist Sri Sukumar Gowda of Mangaluru. Analysis on Technical Education has been done by Assistant Professor from PA College, Mangaluru Mr. Mohammed Rafeeq. 2016-17 Karnataka budget analysis was carried out by Dr. Abdul Azeez and questions on PU education sector has been analyzed by Mr. Vasudev.
For last four years, SIO has been analyzing this proceedings and bringing out in the form of book, which was later submitted to various elected representatives. From the past four years, it has been noticed that quality of questions asked is increasing gradually.

NEET: Standardized Testing or A Constitutional and Anti-Federal Quagmire?