Home Open space Why The Opposition Is Silent On Witch-Hunting of Activists? 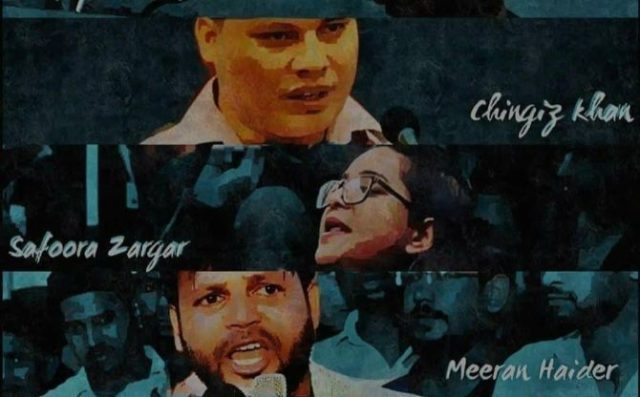 When the whole country has been put under the crippling lockdown to fight the COVID-19, the Indian government launched brutal crackdown on the activists who raised voice against it. It has been going after these activists by invoking the draconian anti-terror law UAPA.

First, they have arrested Jamia Millia Islamia research scholar Meeran Haider, who is also youth leader of the RJD. Then, they have arrested a pregnant woman Safoor Zargar who is a research scholar at the same university. Then, they arrested Jamia Alumni Association’s President  Shifa-ur-Rahman. These activists, who were part of anti-CAA movement, have been booked under the UAPA. Umar Khalid has also been booked under the UAPA but not arrested. All of these Muslims are being accused of carrying out the Delhi violence in which most of the victims were Muslims. These activists are being blamed by the Delhi police to hatchet conspiracy to carry out communal violence in Jafferabad in which around two dozens of mosques were targeted, and most of the deceased, the injured and the displaced are Muslims.

This shows that there is a clear attempt by the Central government as well as the Delhi police to frame these activists to protect the real culprits and to change the narrative about the Jafferabad pogrom. The Civil society has noticed government’s sinister design and stood up to the witch of the students. They have issued statements condemning these arrests. Amnesty International India on Friday termed the arrest of these activists “brutal” and “cruel”.

“The Government of India has been exceedingly intolerant towards free speech and dissent. But to arrest Safoora who is in the second trimester of her pregnancy and send her to an overcrowded prison during the pandemic highlights how brutal is the ongoing clampdown in the country”, said Avinash Kumar, Executive Director, Amnesty International India.

He further said when the country battles the COVID-19 pandemic, it is extremely cruel of the government to arrest and imprison a person using repressive laws just because they have been critical of the government.

Civil society and rights groups have termed these arrests as cracking down on the dissenters and the elimination of the opposition. However, the opposition parties and leaders, who opposed the CAA and held government responsible for the Delhi pogrom, failed to raise voices in support of these activists. None of the prominent opposition leaders issued any statement criticizing these arbitrary arrests of these emerging Muslim leaders. The silence of secular leaders and parties on it show that they have lost political interest in the Muslims and take their votes for granted.

They are taking not only their votes for granted but also their associations with the parties. The Rashtriya Janata Jal (RJD) did not come in support of its youth leader Meeran Haider, who is president of Delhi RJD’s youth wing.  The Aam Aadmi Party suspended its leader Tahir Hussain despite the fact that Hussain was himself victim of the violence and he was rescued by the police. AAP leaders are aware of Tahir’s innocence but they refused to come in his support.

Senior journalist Aarfa Khanum has rightly pointed out that the Muslims have been politically orphaned in this country.

“They’re going after the most bright, articulate & brave young Muslims, pressing terror charges against them. Not a single sane opposition voice has condemned this fearing it may be politically risky. Today, those who defended the constitution have been orphaned,” tweeted Arfa.

The issue is not just limited to standing by the activists when they are facing witch-hunt. The issue is deeper. The secular parties have not spoken up as the Muslims are being targeted, boycotted and attacked in the view of Corona outbreak. The community is being held responsible for spreading the diseases. Muslims vendors are being abused, boycotted and harassed. They are not allowed to sell the vegetables in the non-Muslim areas. Arab countries have spoken out on the attacks on the Muslims but not the political parties which took their votes. Muslims have not only been politically orphaned but they are also being considered political untouchables. These parties started believing that if they will speak up on the atrocities committed against the Muslims, they would lose the votes from the majority.

Question of Age and Agency in Women’s Marriage