Home Arts & Culture A Country Poor Or A Country Rich?

Do you know this nation, where I live?

I live, in the rich country of poor people.

Or maybe, I can rather say,

The poor country of rich people?

This thought always, bewilders me.

And I will tell you why.

‘Because the poor gets poorer and the rich, richer.

So how shall I ever ‘identify’?

The rich country of poor people.

Maybe I can call it this!

Where vaults are filled with opulence of gold,

And void reforms improving its bliss.

And we’ve got abundance, lying in treasures,

And caskets, of each temples trust.

And this is the country, where fields produce,

Vintages through its fertile crust.

But this is the country, where farmers starve,

And millions die, due to poverty.

Maybe due to, the monstrous tyranny.

This is the country, with high speed data,

But this is the country, just the same,

Where pavements are filled with benighted souls.

So all these thoughts, put me in chaos,

And I move to, my next conclusion.

The poor country of rich people.

I’d say maybe, this is this nation.

A country so poor, poorer than you think,

Which still remains, ever developing.

Whose faith lies, in tainted corruption,

And putrid deception is its own thing.

And lazy riches, stay on the couch.

Where souls with dreams, work in factories,

And we’ll find them, moving around freely.

And the reason is, their constant poverty.

Where the moneyed break, the simplest form of rules

Just to make, some more money.

And the indigent work, like bees in a hive,

And all they get, is a drop of honey.

So again I find, myself perplexed,

And determined to know, where do I live?

What kind of a country, am I in?

A country poor, or a country rich?

Well, I can conclude just one thing,

I live in a country, with this one loophole.

And poverty lies, in the richest soul.​ 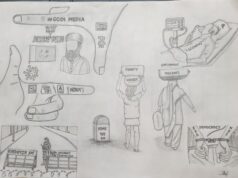